In the eastern Dutch province of Gelderland, a special kind of darkness has been brewing lately. In 2015, a local scene which already bolstered names such as Galg, Fluisteraars and Wederganger got even bleaker through the emergence of the collective known as Haeresis Noviomagi, a truly DIY entity whose constant and varied output of black metal and drone has been a sigh to witness. The first heretic manifestation was “Deluge” by Lubbert Das, a two song EP bringing together raw black metal with punk outbursts, and whose live manifestations can only be described as cathartic nastiness. It is therefore an absolute pleasure to announce that an exclusive Portuguese appearance for the first time by Lubbert Das shall take place in North Dissonant Voices 2017.

Coming from the greater Porto region, Dolentia have been honing their craft with close to a dozen releases in the past twelve years, totalling a respectable two demos, five splits, the last of which released by Altare a few months ago and featuring Finnish trio Serpentfyre, as well as two full-lengths, with 2015's “Iniciação Eversiva” being the most recent one. Portuguese sung occult black metal which dwells in the old school no bullshit sound of old and whose melodic leanings conjure images which are equal part sorrowful and grandiose. Keeping with the idea behind North Dissonant Voices of giving an expression space to the uncompromising voices of the local underground, it is only fitting to welcome the home grown Dolentia to the second edition of the festival.

When done properly, black metal can be an overwhelming experience. This doesn't necessarily require a wall of sound or an overbearing amount of elements, as the raw conjuration of a simple riff and scream can carry in itself all that is necessary to achieve that ever sought transcendence. It is in this minimalistic setting that Turia operates, with their sound grounded as if within an impressionist canvas ripping itself open through a ritualistic form of expression. After the release of their debut “Dor” last year, the Dutch trio belonging to the Haeresis Noviomagi collective has been honing their craft with a series of mesmerizing live performances. As with their partners Lubbert Das, their first appearance in Portuguese soil will take place in an exclusive performance at North Dissonant Voices 2017

No one, inhabiting nowhere. That might very well be the state one attains after beholding a post-industrial session at the hands of Tendagruta. The duo's torturous sounds conjure ruinous landscapes and forces one to embrace the inherent contradiction between expansive landscapes and the hellish claustrophobia of the ground below, following the best tradition of taking a ritualistic approach to power electronics and post-industrial, as if SPK was the starting point to a trip that goes as far into Deutsche Nepal as it does to Halo Manash. So it shall be witnessed when Tendagruta take the stage for a rare live appearance at North Dissonant Voices 2017.

Somewhere between the tonal fascination of drone, noise's attention to unpleasant details, and the otherworldly evocations of dark ambient, lies the most recent manifestation of Haeresis Noviomagi, Paean. Having recently released their first EP “Bloemfontein”, the mysterious duo is now bound to bring forth their tortuous evocations in a live setting to those willing to lose themselves within, aptly joining their label partners Lubbert Das and Turia for an exclusive debut in Portuguese soil during North Dissonant Voices 2017. 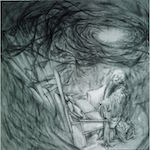 Com boas expectativas em relação a isto. Espero que se confirmem...
"...so I drag these rusty chains. Across these burning fields of Nothingness. Struggle through the swamps of mental darkness I seek and I wait... Wait for the day to come. The day when these chains no longer pierces my flesh and limit my soul."
Topo 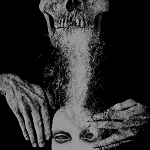 // The year is ending in fire and we don't want 2017 to start in vain, with two headliners to be announced shortly, pre-sales are now running for North Dissonant Voices 2017 & Invicta Requiem Mass II, only at signlrex.com

[*] NDV ticket cassette features exclusive/unreleased tracks from most of the bands playing, to be revealed soon!