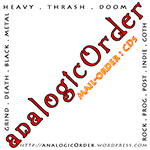 “MEMENTO MORI is a Spain based label/mailorder founded in early 2010
that focuses on old school Death Metal, Doom Metal and anything in between, on CD format.“

COFFINCRAFT - In Eerie Slumber (CD) | [MEMENTO-XLIII] | Release date: July 27th, 2015.
The debut full-length from one of Finland´s best kept underground secrets.
This Finnish quartet deliver an intense, tight-as-fuck, crushing and massive brand of Death Metal that amalgamates the best elements of the early-to-mid 90´s European scene and most especially the old Swedish and Finnish tradition: you can tell the ingredients, but they´re all mixed up in a personal, determined and classy way that make the album a highly dynamic orgy of riffs and assorted tempos that will definitely appeal to fans of bands such as Dismember, Carcass, Fleshcrawl, Entombed, Amorphis, Furbowl, Bolt Thrower, Demigod, Grave and Convulse.
Mastered by Damian Herring﻿ (Subterranean Watchtower Studios﻿, U.S.A.) and featuring artwork and layout by Alexander L. Brown (BNB Illustration & Design, New Zealand), this slab of excellent Scandinavian extremity titled "In Eerie Slumber" is a breath of fresh polluted air from the bowels of humane madness and sickness, and a Death Metal juggernaut to be reckoned with!!!
http://coffincraft.bandcamp.com/album/in-eerie-slumber

BURIAL - Relinquished Souls (CD) | [MEMENTO-IX] | Release date: July 27th, 2015.
Repress of the Memento Mori´s 2012 official reissue of this underground Death Metal masterpiece from The Netherlands, originally released through West Virginia Records back in 1993, featuring the "Frigid Cold" demo (1992) as bonus tracks for a total of 13 songs of crushing and rotting old school Death Metal that´s aggressive yet catchy and killer riffs aplenty, that will appeal to any fan of genuine Death Metal and legendary bands like Death, Massacre, Morgoth and Pestilence.
It´s a real shame that such a monster of an album passed through almost unnoticed two decades ago and it´s so hard -and expensive- to get nowadays (even our 2012 reissue is!!!), so this repress is the greatest chance for new listeners, old fans and people who missed out on our 2012 reissue to grab a copy for a very reasonable price.

NOTE: This repress is slightly different to the reissue we put out in 2012. Intro / 1st song and 4th song / outro from the "Frigid Cold" demo now flow together like they did on the original demo tape.
Therefore, the tracklist of the demo songs (both on the booklet and the tray card) has been modified accordingly:

After the critically acclaimed "Profane Cult" EP (2013) that took the underground scene by the storm, the three-headed malefic ensemble from Chile known as Praise The Flame returns with a vengeance in the form of the band´s debut full-length album, aptly titled "Manifest Rebellion".

Featuring past and current members of such underground entities as Death Yell, Megiddo, Insorcist and Occidens, Praise The Flame invoke an uncompromising brand of Death Metal that´s primal, violent, sinister, heinous and neck-breaking riffs aplenty, enriched with sharp leads that cruelly spread all over the darkened, belligerent Thrash/Black Metal vibe that the entire album is soaked in, and poisoned by the ancient spirit of acts such as early Morbid Angel, Sadistic Intent, Massacra, Asphyx, Merciless, Possessed, early Malevolent Creation, Sodom, early Death, Headhunter DC and Kreator.

Funeral Sludge/Doom from the U.S.A.
- -
Spoiler: Mostrar
A collection of all the songs (most of them available on CD format for the first time ever) included in their "...From Forgotten Tombs" (originally released on vinyl format in 2008) and "...From Forgotten Tombs II" (originally released on digital format in 2013) compilations on one disc, featuring the "Pleasures of War" EP (2004), a cover of Pentagram´s "The Ghoul" and their side of the splits with Rue (2004), Sod Hauler (2005), Zoroaster (2009) and Unearthly Trance (2009).

Adorned with an amazingly ominous artwork by Igor "Abigor" Mugerza, "…From Forgotten Tombs I & II" display almost 70 minutes worth of gargantuan sheer heaviness and eerie aural landscapes from the undisputed U.S. masters of funeralized Doom/Sludge Metal with a Lovecraftian vibe.

If the prospect of soul-crushing and utmost heavy Doom Metal suits your fancy, this anthology of Aldebaran´s plodding opuses is an absolute necessity to drown in cosmic terror.

Formed in 2010 and featuring current members of other underground acts such as Pitch Black, Holocausto Canibal and Raw Decimating Brutality, these veterans have a compulsive obsession with Horror flicks-influenced, corpse-grinding, heavy and insanely tight old school Death Metal inspired by the genuine sound of the late 80´s / very early 90´s that they grew with.

In these days of trends and hypes, it´s about time that upright, genuine, uncompromising and gimmicks-free bands take Death Metal back to its original mouldy graveyard, and Dementia 13 will definitely be amongst those leading the march of the deceased.

The wait is over: "Into the Abyss" has arrived.

Crammed with blood-infused yet groovy tempos, sharp yet infectious riffs, a tight rhythm section and a raspy blend of a puke and a growl for vocals, and emblazoned with some great artwork and layout by the Spanish artist Cesar Valladares, "Into the Abyss" can definitely be praised as one of the catchiest and most vibrant pieces of old-fashioned Death Metal to grace the underground in recent years.

Filth, groove and heaviness, all in one, for those that need no pomposity and no modernity in their Death Metal.